Rwanda
The first leg of our journey was to Rwanda to trek into the Virunga Mountains and find the very rare mountain gorillas. We flew into Kigali and spent the night at a hotel famous for housing a lot of meetings with Diane Fossey as she began her quest to save the gorillas from extinction, the Hotel Des Milles Collines.

Teeming with People in Motion
I have two images of Rwanda outside of the gorilla experiences. The first is the density of the population coupled with the lack of motor vehicles. Everywhere we went over the course of the four days we were there we traveled paved and dirt roads lined with people walking or riding bicycles to get to or from the market. Rwanda is the most populous country in Africa on a people per square mile basis. It is also a very agricultural country with all of the crops tended and transported by hand. Women work the fields. Some of the men help but many are totally unemployed and spend the day at the “tavern” by the local market drinking cheap sorghum based beer. Children are everywhere. It seems that if human muscle is the energy source for getting work done it is in a family’s interest to have a lot of kids. Since a genocidal conflict about ten years ago wiped out about 10% of the country’s population, there are a lot of orphans. But my impressions were not negative. We spent all of our time in the mountainous countryside and the people all seemed friendly and happy. Women wear very colorful clothing and can be seen along the paths carrying incredible loads balanced on the top of their heads. Male clothing is non-descript with a lot of old U.S. tee shirts visible. Bare feet are the norm. We brought school supplies as gifts for the local school and Ruth delivered them.

Beautiful landscape
The second overall image is of the landscape. Rwanda is a mountainous country with the mountains being formed by volcanoes. The soil is a rich reddish brown color and the mountainsides and valleys looked like a patchwork quilt of fields with the different crops they grew. Most everywhere you turned was a beautiful vista.

The Gorillas
The mountain gorillas were the focal point of the entire trip and I’m glad we went there first. There are fewer than 700 gorillas left and none in captivity. Fortunately, the people of Rwanda, Uganda and, to some extent, the Congo have realized the importance of protecting and preserving this small group and, through the efforts of Diane Fossey and others have developed what appears to be a very strong conservation approach using tourist dollars to fund their efforts.
The first comment on the experience of being with the gorillas is the physical exertion necessary to get to their location. They inhabit a relatively small geographic area between 9 and 12 thousand feet above sea level in the Virunga chain of volcanic peaks. You drive to a park entrance and meet a guide to begin the trek. We had passes for two days and went to different places each day. When we checked into the camp office to present our passes we were assigned one of four gorilla families to visit. Each morning, trackers had gone out early to locate the families so our guides knew roughly where we would be going. Each day’s trek was different, but both were very strenuous. On day one, we hiked up the Bisoke volcano for approximately 2 ½ hours. By we I mean the six of us, two guides and seven porters carrying our packs with mostly cameras but also water and lunch. The terrain is very rugged with no trails to speak of. After we got to the right height, the guides who are in contact with four trackers by radio located the Amohoro family consisting of 9 animals across a small valley and up on a hillside. So, off we go. Down into the valley and up the hillside. I remember most the density of the rainforest at this location and that we mostly walked on vines which were slippery. When we finally got to the location the guides and trackers would move us around so that we could get the best view of the family without disturbing them. Trying to maintain a stable position from which to shoot photos seemed like as much effort as hiking to the place. But it was worth it as we spent the hour with almost the entire family. We got to shoot the family leader, Ubumwe, called the silverback, from a number of angles and I got one of my favorite shots of his face appearing to stick his tongue out at me. The young ones are very playful and one of them went rolling by Tanner and reached out to touch her. It was quite a sight. After one hour we had to leave as they have strict rules about viewing and contact. Gorillas are very susceptible to human diseases and we were careful to not pass on germs. The hike back was also very strenuous but we were going down all the way so it was easier. We were all also pumped up from the excitement of the experience with the gorillas. Along the way we stopped for lunch and then headed back down. At the bottom of the trek we walked through farm fields and there were children everywhere waving, yelling and asking for money. We bought some hand drawn pictures of the gorillas from the children.
I was impressed by the quality of the guides. They were very knowledgeable about the animals and their environment and had both spent several years with the gorillas. There is an emphasis on conservation and a visible awareness of the uniqueness of the resource. I read somewhere that the gorilla tourism produced the second largest source of foreign exchange for the country. Imagine, 30 permits per day.

Returning to Johannesburg ended the Gorilla Trekking Safari. Repack everything and then off to Botswana.

Game Drive Safari
In Botswana we switched to five star accommodation mode. Now this might be hard to believe since we were in the “bush” but the facilities had all the amenities. The day consisted of a game drive in the early morning and late afternoon with gourmet meals in between. Each of the three camps we visited was different. The first, Khwai River Lodge, was located on a river and adjacent to the Moreni Game Reserve. Our game drives took us both in and out of the game reserve. Here we got a taste of what wild Africa must have been like. We saw a wide variety of animals and birds, but mostly in small groups or single. Across the small river from our camp the elephants and hippos would come to eat and drink. Quite a scene each evening. The highlights of Khwai for me were viewing a Cheetah eating a fresh Impala kill, our first Lions, Hippos up close and an extended experience with a leopard, both in a tree and on the ground. I liked Khwai the best of the three camps.

The second camp we went to, Eagle Island Camp, is located right in the middle of the Okavango Delta and was a water experience. Here we did our game drives in motorboats or canoes. Mostly we saw crocodiles, hippos and birds. Fish Eagles resemble our American Eagle in appearance and were very plentiful. Tony was excited by the abundance of kingfisher birds and he was finally able to achieve a lifelong photographic goal of getting some good shots of the fast moving birds. The guides told us the water levels were unseasonably high which accounted for why we didn’t see many animals. Tony, Gary and I rented a helicopter for a short ride into the back country where we got some great shots of elephants, giraffes, zebra and Impala.
Before going to our last safari camp, we took a one day side trip to a San Bushman village. The bushmen represent the nomadic tribes of southern Africa. A number of them inhabit Botswana. It appears that the government is trying to get them to settle into villages and become a part of modern society. It was clear from our visit that the bush people are caught in between a culture of nomadic existence tied to the land and the modern world. We stayed in an upscale representation of a typical village that the locals had developed with government assistance and experienced a bushman meal, their native dances and customs and went on a hike in the bush to see how they were able to live off the land. Before leaving we were driven through the actual village in which 700 folks lived. I was struck by the contrast of very primitive huts made from termite mound mud and thatched roofs juxtaposed with modern buildings for a school, police and clinic. Everyone in our group was glad we took this detour as it gave us some insight into the changes going on in rural Africa.

Our final safari camp was Savute Elephant Camp. Here there were two primary attractions: Elephants and Lions. Elephants were everywhere, although due to the time of year there were only male elephants around. Right outside of our tent was a watering hole that the camp pumped water into and there were always a large number of elephants coming and going. While impressive as the elephants were to me, the highlight of this leg was viewing a large pride of lions. These animals were big and healthy. There were a number of adult males and females with a lot of cubs. We were able to observe them a number of times with the most memorable being early in the morning of the second day. We came across the pride eating an elephant who had died a few days before. By the time we got there the males had eaten and several of the females had their heads inside the carcass. As they would finish their meal and leave, their entire heads and faces were blood red. It was fascinating to watch other lions and particularly the cubs come up to them and lick the blood off. I couldn’t tell if they were just exhibiting cleanliness or snacking.

Obviously, the photographic highlight of this camp were the shots we got of the lions.

My overall impression of our Botswana Safari experiences were positive from the perspective of seeing the animals in their natural habitat. There was, however, the nagging feeling as we drove around the various paths and roads that we were in a 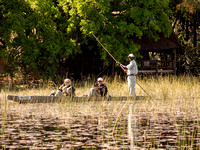