In late September, 2016, I joined 5 other photographers on a Shoot the Light trip with Charles Glatzer, staying at Nanuk Polar Bear Lodge located near Hudson Bay in Manitoba Province, Canada.
Our goals included photographing North American Moose, Timber Wolves, the Northern Lights and Polar Bears.
Unfortunately, we didn't see any Polar Bears, as they had moved further up the coast just before we arrived.
We did make images of everything else on the list. 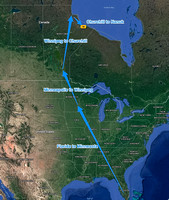