Here is a useful tip for Canon owners (at least the 1DX and 7D2) courtesy of Chas Glatzer of Shoot the Light.

The idea is you set up the exposure for the images you are going to make.  Let's say, for example, you want to use f/4.5 because it gives you a 1000th shutter speed at ISO 800.  Because it is an action shot, you want to maintain the 1000th shutter speed, but as you zoom into a close up of the subject the f/stop changes to 5.6.  In the past, I would set up the shot at 5.6 and use a higher iso.  But, there is a custom function in the Canon bodies that you can set to keep the shutter speed constant as the lens changes the f-stop.  The camera automatically adjusts the iso to keep the exposure constant.

on a 1DX it is in the custom function 6 menu. 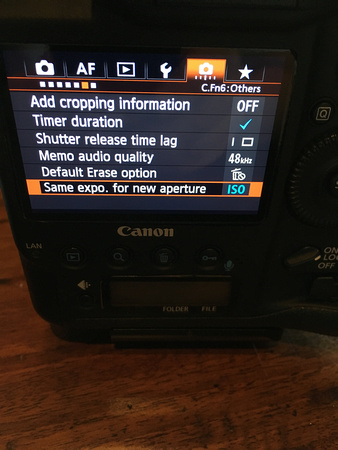 When you select the "Same expo. for new aperture" item you get these choices:

Since your goal is to keep the shutter speed up and the aperture is changing by itself as you zoom the lens, if you select "ISO speed" in this menu, the camera will automatically raise the iso to offset the smaller aperture.  Now, this isn't a big idea, but if you are like me and would have made that adjustment manually, having the camera do it automatically is one less thing to worry about.  The key is the result which is the same overall exposure at the same shutter speed.