Note:  After reading this post, you may wonder why it is in a photography website.  Well, one of my purposes for creating this website is not about the photography.  It is about the wonders of the world, the creation of memories for places I have been and incredible sights I have seen.  This blog post documents the closure of an emotional wound in our family that goes back to 1969....

Jan and I, along with 14 other friends, went to Vietnam in the fall of 2013 with an Overseas Adventure Tour (OAT) tour.  We spent almost three weeks touring Vietnam and a part of Cambodia.  This note is about an afternoon in which Pat and Jeanne Riley joined Jan and me to visit our past.  This note is about our reflection on my wife Jan’s brother, John Kim Vogelsang, who was killed in Vietnam on June 6, 1969.  Everyone called him Kim and he was my best friend in high school.  We worked together in the grocery department at Target.  I bagged groceries and he worked in the grocery pick up area.

Kim was born in October, 1945, making him about 5 months older than I was.  But, he always looked older.  He was a star athlete growing up, playing football, baseball and basketball.  While we lived in the same community, I really didn’t get to know Kim until we both attended Benilde High School in St. Louis Park.  Along with Gerry Babcock, who lived near Kim, the three of us became close friends.  We were to be separated early in life.  Gerry was also a good athlete and one of the smartest people I have known.  He went to Creighton University on a scholarship.  He got a PhD at the University of California in Berkley, which I will come back to later.  To complete the story, in addition to being the best man at my wedding, he became a famous chemistry professor at Michigan State University and unfortunately, died of brain cancer in 2000 T the age of 54.

But this story is about Kim and how his life ended.

After Kim graduated from the University of Minnesota in 1968, he got a job at an insurance company and got married to his high school sweetheart.  You need to remember that at that time we were at the height of the Vietnam war and had a draft that was taking tens of thousands of folks per month.  Unfortunately, Kim’s number came up and he entered the army on December 9, 1968.  My recollection is he was offered the opportunity to go to officer training school but turned it down so he could return home sooner.  After basic training, he was sent to Vietnam on May 22, 1969.  He died on June 6th, and I believe we buried him on June 17th.

Here is where my part of the story comes in.  I had dropped out of the University of Minnesota and joined the Air Force after the first quarter of my sophomore year.  I wasn’t doing too well, needed to work in order to attend college, and generally wasn’t mature enough to balance all the commitments successfully.  The Air Force had a “placement” test which I scored well on and thought it might be a good opportunity to learn about electronics or computers, which seemed to be the future.  This was my first “lesson in life” presented by the air force as, after basic training, they sent me to technical school to learn how to refuel aircraft.  What a disappointment.  But, it turned out to be a blessing as it caused me to grow up and get serious about my future.  In lesson number 2, instead of going to Vietnam, I was then sent to Fairbanks, Alaska, where it is very cold and very dark for a lot of the year.  The university of Alaska offered classes on campus and I was able to complete over a year of credits during my 18 month tour.  Then, lesson number 3.  I had volunteered to extend my enlistment if they would send me to Europe, but I ended up getting sent to Yuba City, California, in the farm country north of Sacramento.  Fortunately, the extension was cancelled and off I went.  I was there for another 18 months or so and was able to get another year of college done during that tour.

This brings two of the three of us together again.  Gerry was doing his post graduate work at Cal at Berkley, which was less than a two hour drive from base.  I had a car at this time and would go down on the weekends.  During this period of time, Berkley was a hotbed of anti war demonstrations and frequently made the national news.  It was actually a very exciting time to be there.  So, how do these dots connect?

I was “home” in the barracks one day and the communal phone rang.  Someone answered it and yelled down the hall as it was for me.  Turns out Gerry was on the other end of the line.  He said, “Johnse, I have bad news.  Kim is dead.”  That was all he said.  The next thing I heard was a loud crash and after a short time one of his roommates came on the phone and said Gerry had just thrown a chair through the apartment window.

With this news I called home for more details.  Kim was going to come home through Travis Air Force base near San Francisco.  As I was inquiring about the possibility of a leave, one of the admin folks told me that if the family made a request to the army I could be given orders to escort the casket from Travis back to Minnesota where he would be buried at Fort Snelling National Cemetery.  I called Kim’s dad, Jack, and he made the request.  So, off to San Francisco for the honor of escorting the casket back home.  There was a formal ceremony as the casket was loaded on the commercial flight and then I got on board.  I remember when we arrived, a lieutenant in the army reserve met us.  He had been assigned to represent the army during the funeral proceedings.  Kim was buried with all the honors on June 17th and in one of life’s more dark ironies, his daughter, Kimberly was born the day before.

Ah, where to begin.  As you might expect, the loss of a brother and best friend has not settled in our family, particularly in a war that seemed to accomplish nothing.  Also, we really had no details of how Kim was killed, what it was like where he was, and all the multitude of feelings that go with such a sad loss.  So, when we agreed to go to Vietnam on this tour, in the back of our minds we hoped to be able to find some closure by experiencing the place where he died.

Back home, before we flew to Vietnam, Jan searched all our records to see if we could identify the location where Kim was killed.  The best we could do was extract this from the Army’s notification of Kim’s posthumous award of the Bronze Star Medal For Heroism:  “For heroism,….in connection with military operations against a hostile force in the Republic of Vietnam.  Private First Class Vogelsang distinguished himself by exceptionally valorous action on 6 June 1969, while serving as a rifleman with Company A, 2d Battalion (Airmobile), 5th Cavalry during a forward operation base in Tay Ninh Province…”

When our group first met in Vietnam with our guide Lee, we talked about the three families with Vietnam War experiences and how we might make some side trips to places that had significance to each family.  Armed only with the information Tay Ninh Province, Lee gave it some thought and said that the main activity in Tay Minh took place on and near a place called the Black Virgin or Black Lady Mountain.

There is a long historical story about this place, which today is a Buddhist  shrine.  He said we could do a day trip when we were in the area and we agreed.  The Riley's, who had also done a day trip to the location where Pat flew helicopters agreed to go with us.  So, on September 28th, while the others continued on the tour, we hopped in a car with a driver and headed off for the Black Virgin Mountain.

As we arrived, it was clear that this was a very active location for tourists and religious pilgrims.  There is a very well organized park in which you take a tram to the location of the gondola ride which takes you about half way up the mountain to the location of the Buddhist temple complex.  As we were riding up the mountain, I looked out and said to Jan, we don’t know exactly where Kim died, but let’s agree that we are overlooking the place as we ride up.”  She agreed, and for us, this ended one of the open questions.

The Countryside PanoWe talked about Kim was probably killed somwhere in this scene. At least, that is what we decided to believe.

As we walked up the hill towards the temple I was struck by the beauty and solemnity of the place.  This sure seemed like a great place to pay our respects and, perhaps, put some closure to this open wound. 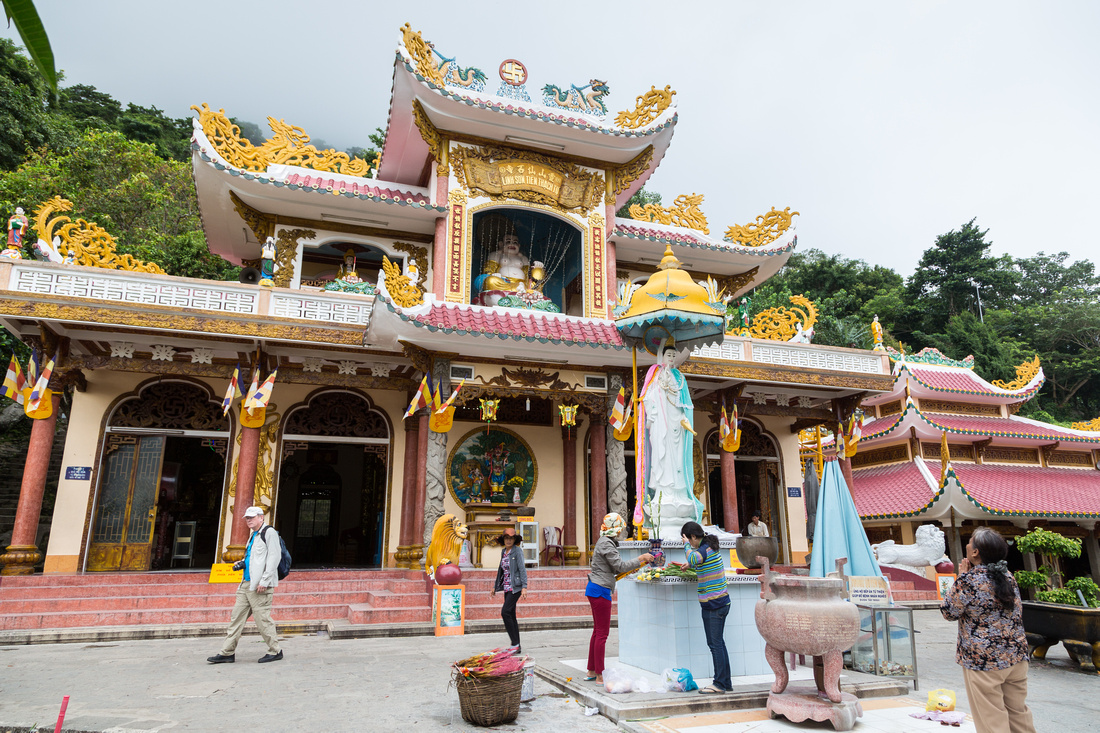 We had a local guide, who explained all the different parts of the complex.  After his explanations, our first stop was the fence at the edge of the complex.  Here we looked over the valley.  Jan had purchased a bunch of flowers and she took the petals off and tossed them over the fence.  They gently flew away into the countryside. 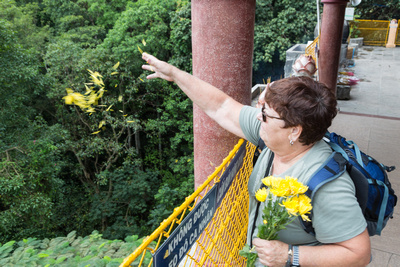 Jan Sends Her Flowers to the Wind 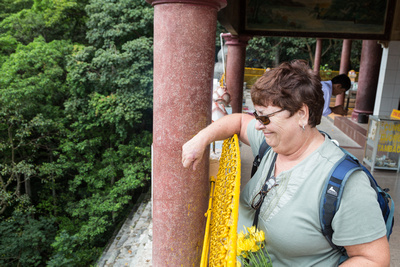 Then, our guide obviously had done this before as he pulled stuff out of his pack and explained that it is a Buddhist tradition to burn tokens of life as offerings to our ancestors.  As he laid out play money (to represent wealth) and incense he gave Jan and Jeanne a piece of paper to write Kim’s name on.  Then we took them to the stove where the coals smoldered.  He stoked the fire and then Jan and Jean put the name slips in followed by the money.  It was a moving moment for me, bringing tears to my eyes. 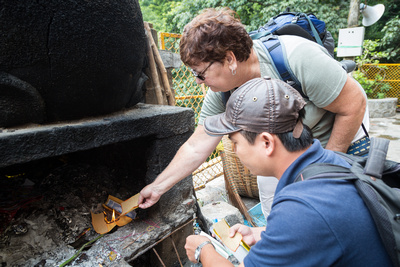 Note to KimBurning tokens of life for the attention of our ancestors.

Finally, we went into the temple where Jan and Jeanne lit a candle and made an offering.  When you do that the monk strikes a bell which seems to resonate for a long time.  Another inward feeling of peace. 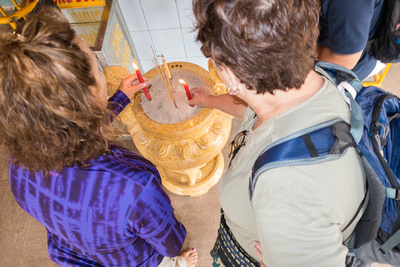 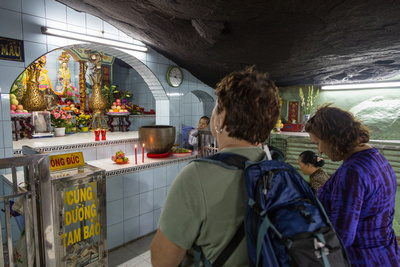 The drive home was quiet, and quite adventurous.  I don’t think a lot of tourists travel the roads we were on.  We even witnessed a motor scooter crash with both occupants thrown off.  They cursed the person who struck them and got back on.  Vietnam is an amazing place!

To end this story with another of life’s ironies, Jan and I were married 42 years ago and have two wonderful adult children and five grandchildren.  I think the war is now behind us.

Here is a slide show from our visit: