You would have had to have your head in the sand to not be aware of the rapid emergence of high tech drones in the world today.  Starting with war (where much new technology seems to be developed), drones are starting to be seriously thought of as useful tools in the rest of the world.  There has been an absolute plethora of new drones in every shape, size, capability, etc.  Jeff Bezos made a splash with his recent 60 Minutes interview, showing a prototype Amazon delivery system based on small remote control drones.  While perhaps years into the future, there is a "now" element of drone technology that is selling like hotcakes.  That is, small quad through octo-copters with relatively light payload capabilities, currently being sold mostly to hobbyists (another place where new technology is fostered).

Trying to maintain an element of childhood curiosity as I age (some would say I have many other elements of childishness in tact) I became interested in these machines a couple of years ago and purchased a Parrot A.R. Drone, then the 2.0.  It was a very light quadcopter with a built in camera that you controlled with a wifi connection to your iPhone.  One of its greatest attractions was that it is ready to fly, right out of the box.  The 2.0 version also has more advanced control capabilities so you can easily fly it.  But with limited range due to wifi it remained a fun little toy to play with and start to understand how these devices might be used.  Then, enter the DJI Phantom. 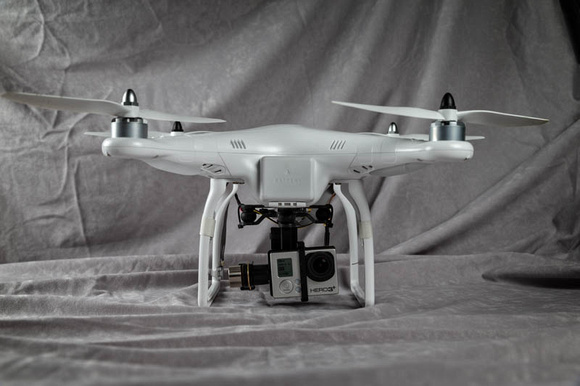 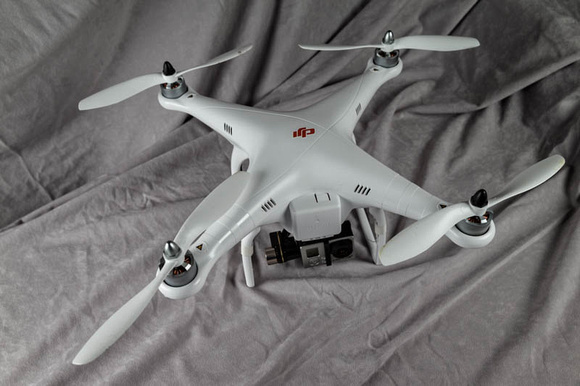 This is a more serious entry into the remote control drone field for hobbyists.  It is controlled by a radio, has much more range, can carry a heavier payload (which is where this gets interesting), can be controlled using gps and has some fail safe features that are attractive.  Of course, it costs more than the Parrot.

So, following the development of this technology, it was easy to zero in on this as the next upgrade.  In continuing research I came upon a hobby store on the web located in Atlanta, Ga.  It is called Atlanta Hobby (how original) and the fellow to know is Cliff.  So, what do they bring to the table? More in a minute.  But first, if the goal is photography, you need a camera.  Since these drones don't carry much weight it becomes a fairly important decision.  Enter GoPro.

GoPro is an interesting camera.  It has only one real purpose and it excels at that:  take stills and video of action, up close and personal to give the viewer a real feeling of what the activity might be like.  It was invented by a surfer and caught on big time with the extreme sports crowd.  When I have been on photo safaris I have noticed an increase in the number of folks who carry these little cameras.  At first I thought of them as toys, but then I got one, and now I am hooked.  Put it on your head and it records your experience the way you saw it.  With the advent of the 3rd generation, called GoPro Hero 3+ the camera has evolved into a more serious tool.  It has two characteristics that make it an important part of my story:  the image quality is very high and it is very small and light.  In short, it is a perfect camera to fly on the Phantom.

So, the last piece of the puzzle  that, in my opinion, makes the phantom become much more than a toy is the Zenmuse H3-2D gyroscopic stabilizer. it mounts on the drone and the camera attaches to it.  A couple of the early issues in mounting cameras to these drones were vibration and stability.  Because the drones are so small, it doesn't take much wind to have them rock back and forth and up and down.  The the first solution was to mount the camera with rubber grommets, which tended to reduce the vibration but left the shaky video from the drone movement.  The stabilizer fixes this problem and also adds the feature of being able to control the vertical orientation of the camera.  This is helpful in leveling horizons or, generally, getting more from the experience.  Here is a video with installation instructions, but go to 2:11 in the video to see it work.

Now, to bring it all together:  the phantom (now 2), the zenmuse, the GoPro and Atlanta Hobby.  If you are interested in this technology and aren't an experienced R/C hobbyist, Atlanta Hobby (remember Cliff) provides a turnkey solution.  They will put all the pieces together and ship it to you tested and ready-to-fly.  As you might expect, as these more sophisticated capabilities are added, the price goes up.  From a few hundred dollars to get started, it is pretty easy to get to a couple of thousand by adding all above and throwing in a video downlink.  But there are several steps along the way that cost less and may meet your needs.

So far, so good.  The drone is a lot of fun to fly.  I have had several inquiries about using it for commercial purposes, such as promoting real estate, or providing overviews of particular places.  I have to admit, this capability adds another dimension to the experience of photography.  One of my hopes is that it can come on safari with me to some of the more wild places.  (One note:  the FAA regulates things that fly in the sky.  They have not issued regulations about this level of drone, so be careful if you have one.  Here is a link to an article that attempts to report the current legal state for drones.  Tip of the hat to Andy Biggs for passing on the link)

So, I have been making videos as I learn how to fly the Phantom.  Here is a recent one in which it flies out of sight to take some video at sunset, here in southwest Florida.  If you play it in HD and full screen you can get the best experience.

I know I have a long way to go in getting competent with this new tool, but for sure, it is a tool in my photo tool box that will be here for awhile.

In a future post I will talk about my experience in learning to process video...it ain't pretty.