2013 was a busy travel year with photo trips and family vacations filling parts of many months. 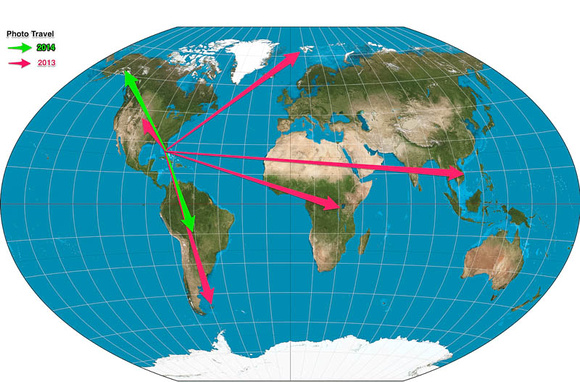 Starting in December, 2012, I went to the Falkland Islands for 17 days.

Then, in March, my son in law and I attended a workshop in Montana at Triple D where we were able to photograph captive snow leopards and mountain lions among others.

In June, my wife and I along with two other couples spent a week in Tanzania, and then a friend and I transferred to Kenya for a photo safari.

In August, I traveled to Svalbard, a group of islands north of Norway for another photo safari looking for polar bears on the ice pack.

In September, we traveled to Viet Nam with 12 other friends on an Overseas Adventure Travel tour.

We are getting ready, as I write this to join our entire family during Thanksgiving week for a Disney cruise followed by Disneyworld and then Thanksgiving at our house.

While I still have many galleries to publish from this year, 2013 is almost gone.  It is time to think about 2014.  This is starting out to be a more quiet year.  But, I do have a couple of exciting plans reserved.

First, in July, I will be joining Chas Glatzer for what I believe will be my 19th Shoot the Light workshop.  We will be going to Lake Clark National Park in Alaska to photograph Coastal Brown (Grizzly) bears.  This will be my fourth photo trip to Alaska and my third to photograph bears.  So, why did I decide to go again?  There are several reasons.  First, I have found that repetition for a subject yields increasingly interesting images.  Second, each of the trips has been in a different location, yielding different settings even though the subjects may be the same.  Third, with some luck we will see many more bears with cubs than I have seen in the past.  This may be the most important reason as the cubs yield fun photos.  Finally, I enjoy Chas and his workshops.  All the hard work is done for you:  scouting and booking the place, picking the right time of the year, gathering a like minded group of folks and finally, putting you in front of high quality subjects.  While you may pay more than a self guided tour I believe the extra cost creates the value of more high quality photo opportunities.  And, of course, you get all the experience and insight of Chas!  So, Alaska it is, one more time.

I really like to photograph big cats in the wild.  On my list for a long time have been Jaguars.  The premier place in the world to photograph Jaguars, along with a fairly long list of other exotic creatures, is the Pantanal area in Brazil.  I will be going with Joe and Mary Ann McDonald, a couple who have been leading trips to this area for years.  Joe actually won an Image of the Year award in the big BBC contest with an image he took last year.  One of the more interesting places I'm looking forward to is the Flotel, 10 room floating hotel located on the river we will be exploring. 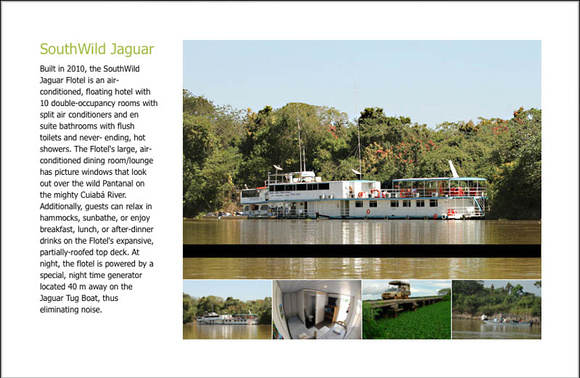