I have been a Canon shooter since the original D30 digital slr.  Off and on I have tried other systems, buying some Nikon gear a couple of times.  But due to the investment in super teles in Canon, I have always come back.  This was particularly frustrating when Canon was suffering through the well publicized problems with the 1D mark III and Nikon was coming out with significantly better bodies.

But, my feelings have changed pretty significantly with the release of an upgraded line of supertele's, converters and, most importantly, the 1DX.  I used all new generation lenses and two 1DX bodies on my recent trip to the Falkland islands.

If you are a wildlife shooter I refer you to this user review of the 1DX, which I think was the best one I have read.  You can find it here.  It is written primarily for bird shooters, but the fast moving, flying birds represent a good bogey for wildlife shooters.

My personal experiences on this recent trip included the daily observation that this is the best gear I have ever used.  Typically, one of the 1DX bodies was attached to a series II 500mm super tele.  Sometimes alone, and frequently with the 1.4x teleconverter.    Compared to the old days with the previous generation, I noticed no slow down in the focus acquisition capability of this combination.  And, it might be my imagination, but there seemed to be a much higher percentage of very sharp images.  I know I captured some flying penguin images in the Falklands that would have been blurry with my previous gear.  I even felt comfortable putting the 2x on occasionally, something I never did with the previous generation.  The other body shared time with the new 24-70 f/2.8II and the 70-200 II, again with and without converters.  I also used the 16-35 wide angle and 15mm fisheye. 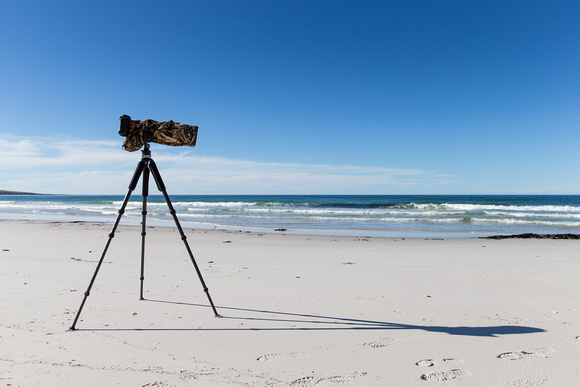 All of this gear was micro focus adjusted using the Reikan Focal software which I recommend highly.  I also have the unscientific feeling that the adjusted lens/body combinations worked better.

So, while the gear for a wildlife kit is large and HEAVY, It seems to me that it is the only way I can get the images that I seek when traveling half way around the world.

I have also become a big fan of the Gura Gear line of bags to carry my gear.  Along with a Kata trolley, moving 50 lbs of gear through airports is easy.

Oh, and one more thing, I would be remiss if I didn't mention my little Sony RX100 point and shoot.  This is an incredible camera.  Total manual control, shoots raw, bigger sensor and 20 megapixels.  Easy to use.  All of the video I am using to intro or exit my galleries in the Falklands was shot using this tool.  It sure looks to me like Sony has the lead in sensor design.

As an aside, I am building a Panasonic micro 4/3 system which I hope will have sufficient image quality for primary use in my travel photography.  I used this gear in our Argentina/Chile tour in 2011 and at the time was unhappy with the electronic view finders.  But, the quality of these cameras has been steadily improving.  With the new 12-35 and 35-70 f/2.8 zooms and the soon to be available GH3 pro body, I am hoping a great quality, light weight travel rig will materialize.  More on that later.